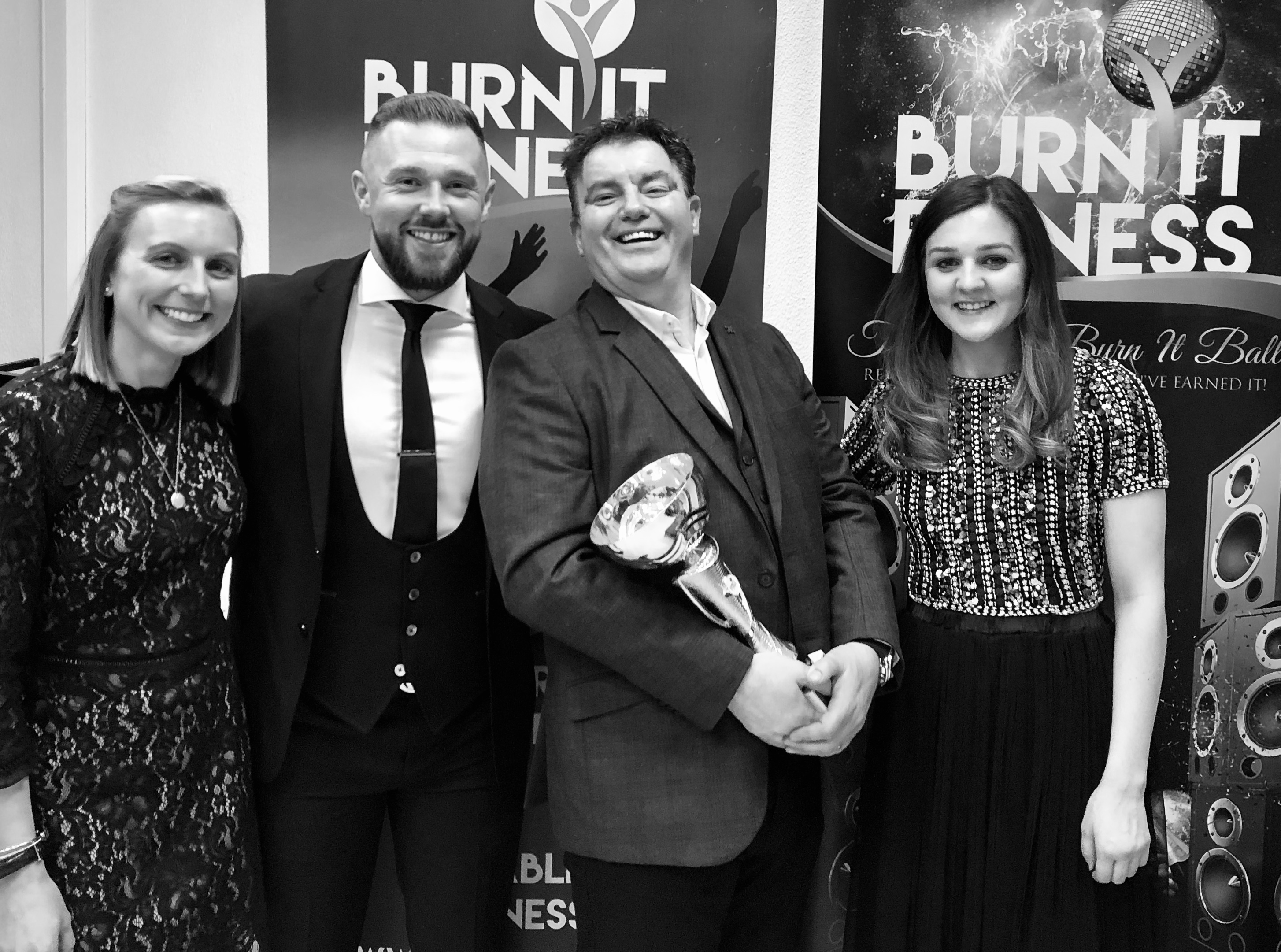 My inner pessimist was telling me “you can’t run, you can’t do circuits, you’ll have a heart attack, you’ll look stupid, you’ll never be able to keep up, you won’t be able to push yourself hard enough, your T-shirts will ride up, and you won’t fit in fatty because it’ll be all mean girls and buff boys.”

"I’m stronger mentally and physically than I have been since I was a child; I have a new way of life which is absolutely “fun, sociable and sustainable” - the tagline doesn’t lie - and I’ve found a genuine third place at Burn It that I simply can’t imagine being without."

I’ve just completed and won, the 10 week Body Transformation + programme and to say it was transformational is a massive understatement!

It’s my daughter Ashleigh’s fault I joined. She saw the advert on Facebook and talked to her mum Lesley and I about it. Signed herself up and convinced us to join her. For some reason, we signed up without telling her – but the penny dropped when we said we’d give her a lift to the launch night as we were going anyway, and her reaction was priceless. It’s been an absolute privilege to have been on this programme with ¾ of my family and with our son Jamie cheering us on every step of the way.

I personally signed up because I was in a health rut. I was well overweight and well under-fit. I did have a state-of-the-art cross trainer at home, and I was even using it! I was walking my 10, 000 steps a day, but I wasn’t really getting anywhere. And then I did one of those life assessment things. You know the ones, on a scale of 1 to 10 how good are your finances, career, relationships, sex life. And I was doing great. Until it came to health and wellbeing, and then my score was hopeless.

I got to thinking that, with everything else looking so rosy, I should really fix that, because I really, really didn’t want to get ‘THAT’ wake up call one day.

I have to admit to taking at least a week, and maybe more, to reconcile in my head that I was joining. My inner pessimist was telling me “you can’t run, you can’t do circuits, you’ll have a heart attack, you’ll look stupid, you’ll never be able to keep up, you won’t be able to push yourself hard enough, your T-shirts will ride up, and you won’t fit in fatty because it’ll be all mean girls and buff boys.”

But … the time was right, and I managed to ignore that voice long enough to pay the money and pitch up.

Before we even started, I lost 15% of my body fat. Well, that was the difference between my scales and Paul’s anyway. I was so convinced that mine were right and his were wrong that at my final health check as I’m watching him pressing buttons and looking at the numbers funny, I’m thinking ‘he’s going to have to admit he made a mistake at the start now’.

I missed the first Sunday session (which used to have a completely different meaning for Ash & I!) because I was away on business. But that Sunday was also week 6, run 3 of my couch to 5k programme – the 25 minute run, and the first I was doing solo. 12 minutes in, I was in agony; I had shin splints that made me feel like the bottom half of my right leg had disconnected from the top half. Practically crying with pain and frustration, I was all set to quit!

Coming back home the following Thursday I get a phone call from Ashleigh – am I going to Burn It tonight? ‘I’ve missed your mum’ says I, ‘I was planning a night in’. ‘Mum said you’d use that excuse!’ Ashleigh laughed. Needless to say, I was running around Howden park in the rain a few hours later.

I asked Paul about the shin splints. In his usual style, he explained all of the physiological and bio-mechanical details and then said, “keep stretching, keep coming to camp, and they’ll go away”. As always, he was spot on! The following Sunday after a few more boot camps, I managed 28 minutes along the sea front at Millport – pain free for the first time – and there’s been no looking back since.

Anyway, fast forward past about 30 camps, 20 morning jogs, 1 home exercise workout (sorry Paul); my conquering of the burpee, squat jump and push up; hill runs, a brilliant first park run thanks to Becky and loads of the other BT+ team members; Murieston trail; Cockleroy hill; the bloody forth road bridge (it’s NOT flat) and, on one of my favourite nights of the whole thing, carrying a 15 stone man around on my back. (I only wish we’d played that game BEFORE Mark’s holiday in Dubai!) and I am now officially transformed.

So, what’s changed? It turns out I can run, I can do circuits, I haven’t had a heart attack, I might still look stupid, but I don’t need to keep up, because we “pick our own pace”, I manage to push myself pretty hard at times, and the girls and boys I’ve met along the way have each been more inspirational than the next.

Oh, and I’ve replaced a drawer full of clothes that were too small, but are now too big, with one full of fitness gear that I use practically every day; and the takeaway menus from the side of my fridge have been replaced with park run barcodes.

More importantly I’m stronger mentally and physically than I have been since I was a child; I have a new way of life which is absolutely “fun, sociable and sustainable” – the tagline doesn’t lie – and I’ve found a genuine third place at Burn It that I simply can’t imagine being without. And don’t forget the stats, Paul obviously hadn’t got them wrong at the beginning, and I still lost a massive 8.8% of the fat in my body or 11kg’s (24.2lbs for those like me who still don’t do metric!); gained 3.9kg’s (8.7lbs) of lean muscle and trimmed 36cm’s (12in) from my overall frame – what a difference in ten weeks! Better than that, everybody on the programme has had just as good results, the changes in every single person who took park are truly outstanding, and we’ve had a ball together along the way.

Doing it with Lesley and Ashleigh was fantastic, but my own family was just the start! The Burn It team of Paul, Julie-Ann, Mark and Marcella are right alongside you every step of the way and the friends I’ve made will, I’m sure, last a lifetime. It’s might be a cliché, but it really does feel like one big, happy family. It’s hard to imagine finding a more supportive and motivational team in any walk of life than the BT+ class of August 2018. It was genuinely humbling to have been a part of it, and I’m sincerely looking forward to continuing my journey with all of them.

I have to finish with my favourite Facebook exchange from the 7333 comments on our closed BT+ group:

It’s been a grey Sunday morning and we’ve had a tough old camp doing hill runs and circuits in the grounds of Linlithgow Palace. Paul posts his usual inspirational message about how fabulous we’re doing, and the first comment is from Jenny Campbell:

“The bear crawls through bunny s**t were a personal highlight this morning! Well done everyone 🤩”

Quick as a flash the response comes back from Burn It: “Bunny hops through bear shit would’ve been worse though eh?”

P.S. our son Jamie was so impressed with our results that he’s signed up for the next programme in January.